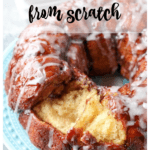 This Cinnamon Monkey Bread from scratch, is going to become your sinful go to brunch treat to wow the pants off your guests. Fluffy pull apart sweet bread rolls dipped in butter, rolled in cinnamon and sugar and drizzled with a vanilla glaze. This pull apart monkey bread recipe from scratch is THE perfect brunch treat. All you need is now is a mimosa to wash it down with.

Excuse me while I lick my fingers as I type. They are covered in brown sugar cinnamon buttery goodness.

Believe it or not, when it comes to breakfast I’m a salty girl all the way. Bring on the crispy bacon. Everything bagels topped with a fried egg. Dripping in cheese as the yolk runs down my chin kind of salty girl. There are a few breakfasts that will make me stop dead in my tracks and put down that breakfast sandwich.

Monkey bread is one of them. Basically I love this stuff. ‘Nuff said. This is a great recipe for Christmas morning, Easter brunch, or really any Sunday that calls for Mimosas and stretchy pants. A monkey bread recipe from scratch is worth all the trouble and then some.

Why Is It Called Monkey Bread?

It’s kind of a goofy name right? But monkey bread is a rich dough, a  yeast bread, where the dough is divided into small balls of dough, rolled into usually a cinnamon sugar and baked into a bundt pan.  And apparently it has to do with it being a finger food. The idea is that you pull apart the monkey bread and eat it… like a monkey might do.

Well Monkey see. Monkey do if you ask me.

How To Make Pull Apart Monkey Bread From Scratch

Monkey bread does take some time to make when making it from scratch. But it’s worth every single amazing bite.

First off, yes we are going to need to work with yeast on this. Now I know there are easier ways to make monkey bread by using frozen bread dough. But this is not that kind of recipe. So yes yeast. Yes you can do it. And yes I’ll help you every step of the way. You might want to give my Ultimate Guide To Making Homemade Bread Recipes a read.

This recipe for the dough comes from Bake From Scratch.  I recommend using Red Star Yeast if you can find it. It’s a premium yeast that will yield premium results. I always get premium results with my yeast doughs when using this yeast, so I highly recommend it.

To make the dough, start by combining warm milk (I recommend using whole), sugar and your active dry yeast into the bowl of your stand mixer or a measuring cup. You want to let the yeast proof for about 10 minutes until it’s foamy.

If your yeast doesn’t get foamy and bubbly, then that means it’s dead and don’t bother proceeding with the recipe. Either your milk was too hot and killed the yeast or your yeast was expired. Be sure to check the expiration date on the package before using it.

To the yeast mixture,  you will add in 1 cup of your properly measured flour. Then some melted butter, more flour and then your eggs.

Once the flour has been added its time to let the dough rise in a warm draft free place for about an hour in a greased covered bowl. Go do some dishes. Or Catch up on Netflix. Yea, I vote for Netflix too.

Ok phase two: time to get your hands dirty.  In one corner of the arena: cinnamon + brown sugar. And in the other corner. Always a crowd favorite. Butter.

Basically get your bundt pan ready by spraying with non-stick cooking spray.

You want to take a small 2-inch piece of dough, and shape into a ball in your hands. I just pinch the ends of the dough together in the center and the roll the dough around on the counter with my hands. Then dip each ball into the melted butter, then roll into the brown sugar cinnamon mixture.

You want to place each ball of dough into the bundt pan. You will still see the bottom of the bundt pan. But you are going to let the monkey bread go through a second rise. Just cover the bundt pan again and let it rise until doubled in size, and puffy – about 30 to 45 minutes.

With the leftover brown sugar mixture and butter, you want to combine the rest and pour over the monkey bread before baking. You may need to reheat the butter again in your microwave if it’s solidified again.

And then bake in a preheated oven for 30 minutes at 350°F until an internal temperature reaches 190°F. Then you can prepare the glaze and drizzle over the monkey bread.

How do I store this cinnamon monkey bread?

I store leftovers, covered in the fridge, for up to 3 days then will reheat again.

Can I make this pull apart monkey bread ahead of time?

Shape the rolls and place in your bundt pan. Then cover with plastic wrap and store in the refrigerator overnight. And when ready to bake, uncover and allow to come to room temperature and rise (the dough will get puffy) before baking.

How do I reheat monkey bread?

Reheat any leftovers in the oven for best results. You can warm the monkey bread back up in an 250°F oven until warmed through (about 10-15 minutes depending on amount reheating).

Do I need to use a bundt pan?

Pour a mimosa. Invite some friends over. And start pulling it apart.

Oh then grab a slice of bacon too if you aren’t too stuffed full of this cinnamon monkey bread. 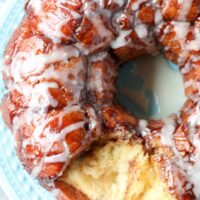 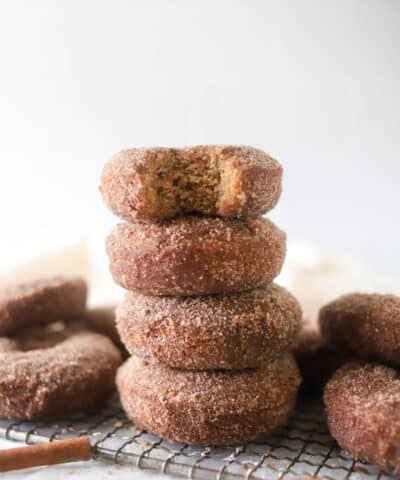 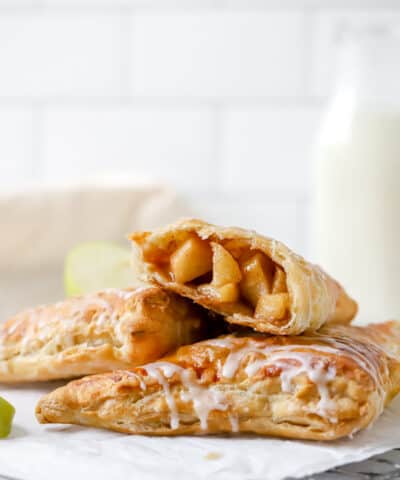 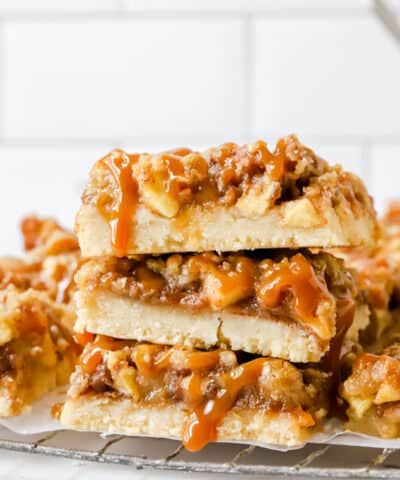 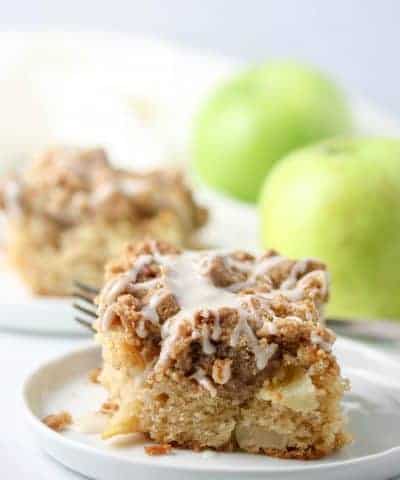