Learn how to make chocolate eclairs in this step by step tutorial. Start making a pate a choux pastry, then fill with a pastry cream and dip them in chocolate ganache for an amazing French treat! 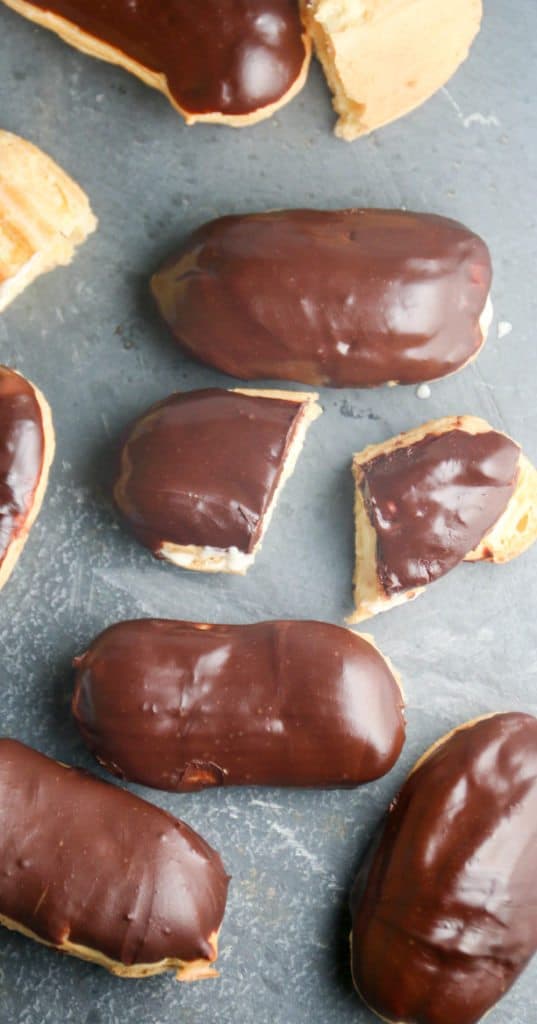 So growing up, I remember the first time I tried an eclair. My relatives from Queens had to come to visit and they brought with them these fancy treats.

I was on my grandmother’s deck. Sun was shining. That first bite? It was like the heavens opened up.

Now if you don’t live somewhere close to buy eclairs, like oh say Paris or a fancy French cafe in NYC then you are going to want to make them at home. But you will be surprised at how easy these French pastries are to make.

To make these French chocolate eclairs, we need to start with making a pate a choux pastry. A pate a what? Pate a choux. Say it with me now. Pat a shoe. Which translates to cabbage (choux) paste (pate) because of the way the dough puffs up in the oven. Basically they look little cabbages if they are piped in rounds.

Where Do Chocolate Eclairs Originate From?

Well according to Craftsy, eclairs originated from the French pastry chef, Marie Antonin Careme at the beginning of the 19th century.

Apparently eclair is the French word for “lightning”and it’s because of the way it looks once dusted with confectioners sugar.

To Make These Chocolate Eclairs You Will Need:

What Are The Ingredients For Choux Pastry?

It’s  simple dough made from flour, water, butter, and eggs.

There is no leavening agents involved here. So go put that baking soda and baking powder back in the cupboard. You won’t need it this time. Nope, no yeast either.

So what makes these little pastries puff up? Well when the liquid in the dough evaporates in the oven, it causes the pastries to puff up.

The pastry dough is a thick enough batter that you can pipe it into shapes. In this case, we are going to pipe the pastry into the eclair shape.

But this pate a choux pastry you can use not just to make eclairs, but cream puffs (profiteroles), a croquembouche (basically a giant cream puff tower), gougeres (cheesy cream puffs). 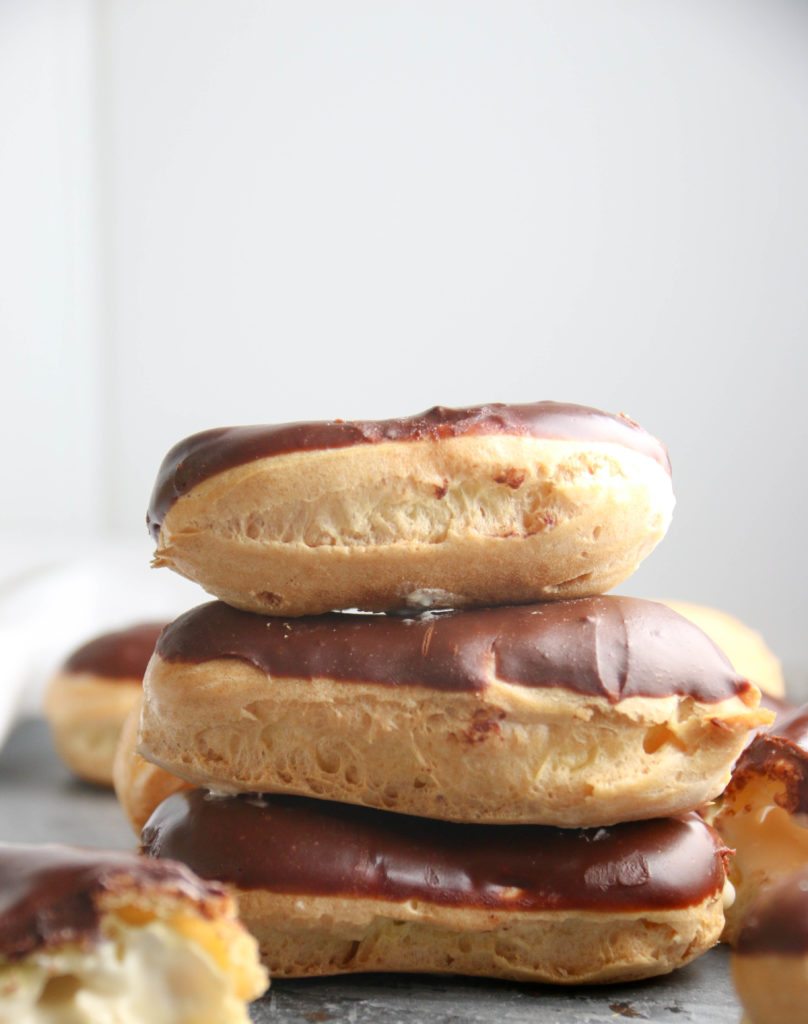 How Do You Make Chocolate Eclairs?

You can watch this video to learn how to make choux pastry and I also have step by step photos below for you as well!

Step 1: Cut your butter into tablespoons or small chunks and add to a saucepan with 1 cup of water, 1/2 teaspoon salt, and 1 teaspoon sugar and bring to a simmer over high heat. Bonus: No need to stir during this! 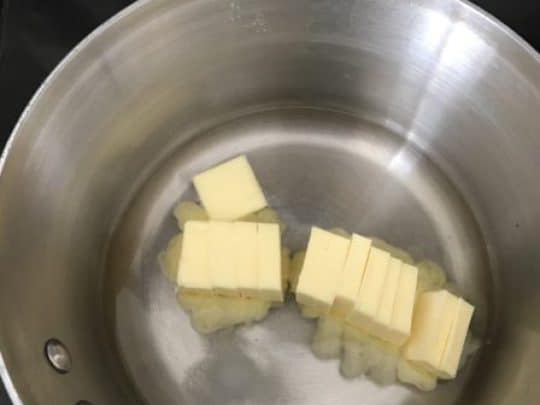 Step 2: Turn down the heat to a medium, and add all your flour. 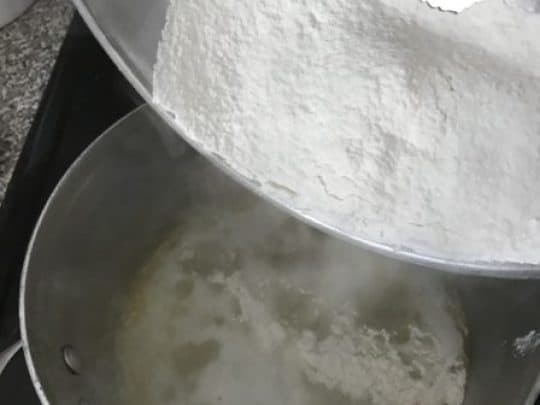 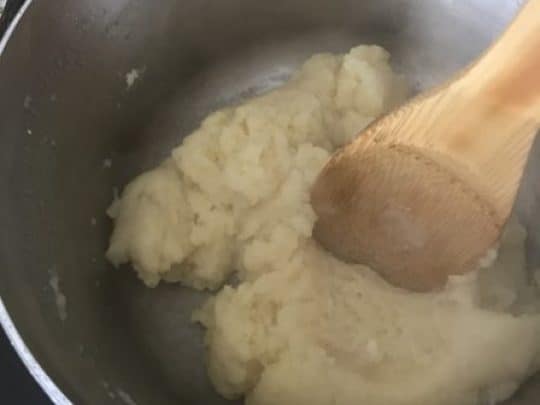 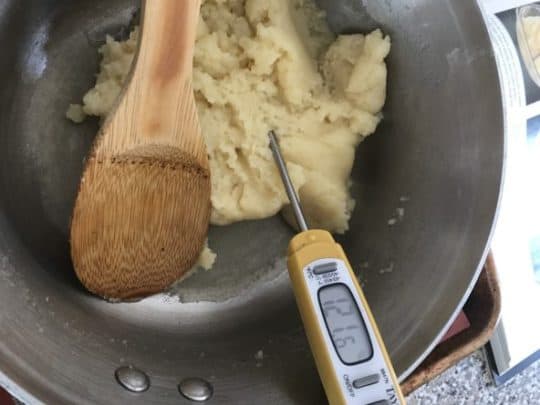 Step 5: Beat in your eggs 1 at a time until you have added 4. Keep in mind, 4 is the recommended number but keep an eye on the consistency as the  number of eggs depends on the type of flour used. For me, it was exactly 4 eggs. 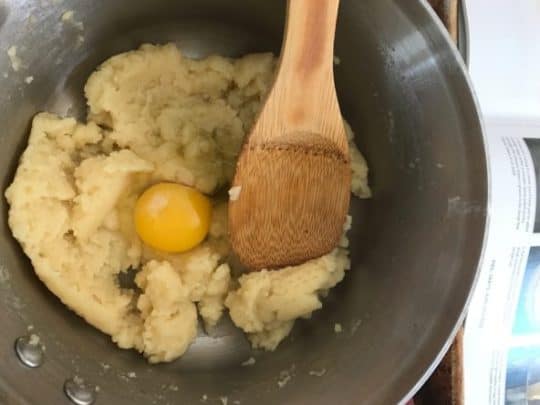 How To Check The Consistency Of Your Choux Pastry?

To determine if the consistency of the batter is correct and you have added enough eggs, look for one of these three things.

#1:  You have added enough eggs when you drag a spoon through the mixture and the groove left behind slowly folds in on itself as shown in the second picture. 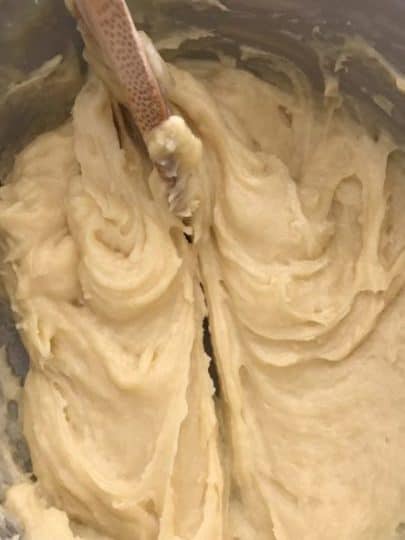 #2: Pull the wooden spoon up out of the dough. The dough should droop off the spoon and not stick straight out. 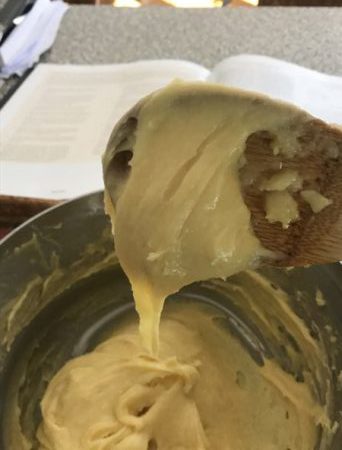 #3: If using a stand mixer, the dough should pull away from the paddle attachment in a thick rope. 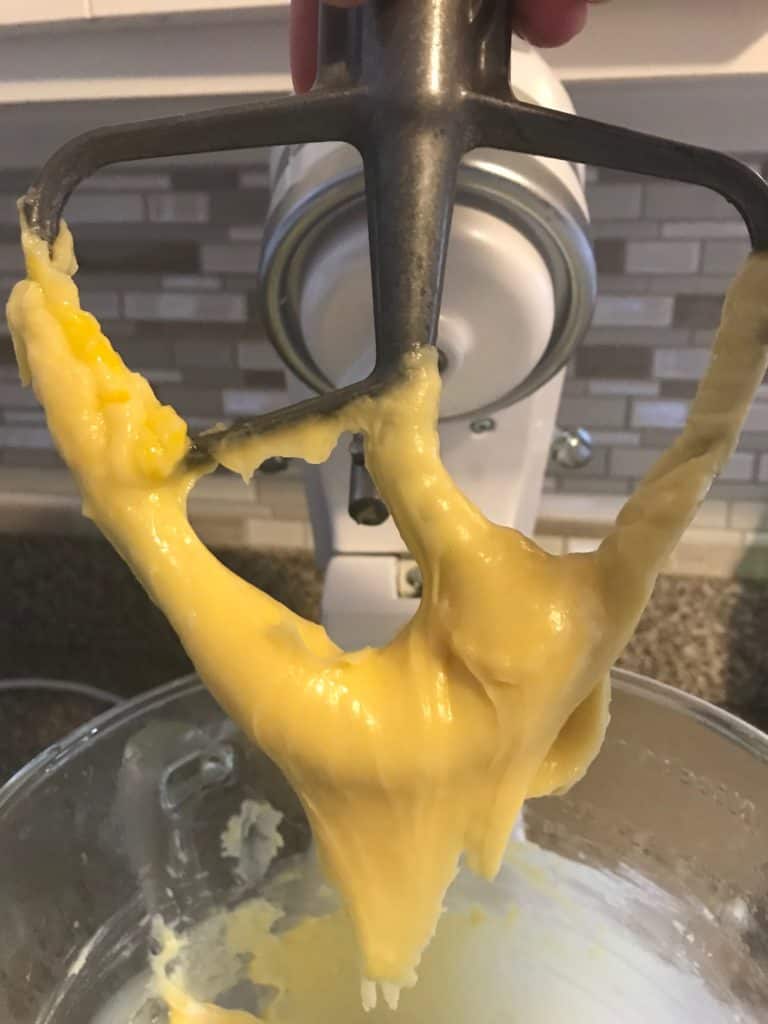 What Size Tip To Use For Eclairs?

Transfer the cooled mixture to a piping fit with either a plain circle tip or a french star tip to pipe your eclairs. You want a tip that is a 1/2-inch (1.5 cm) in diameter.

The french star tip is actually recommended because it increases the surface area for your eclairs and helps in preventing eclairs from cracking as they expand. 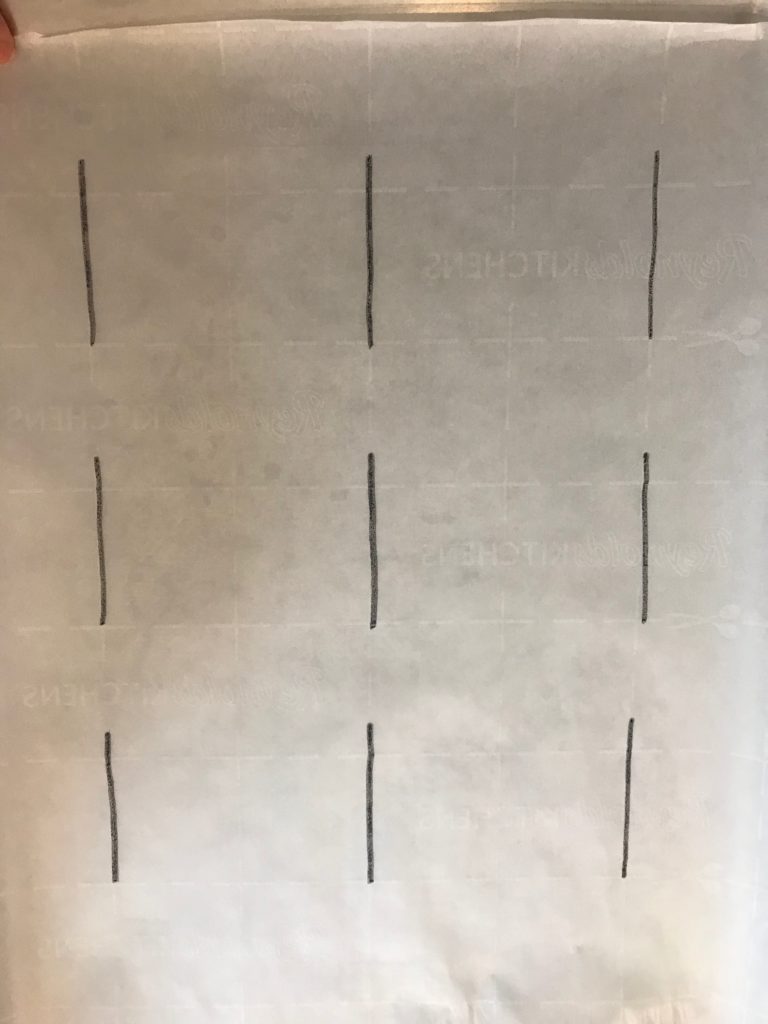 Pro Tip: After piping, give them a quick spray of non-stick cooking spray.

Once piped, you can go ahead and bake them.

How Long Does It Take To Make An Eclair?

When you are ready to bake them, bake them in a pre-heated oven at 400°F for 20 minutes, then reduce the temperature to 300°F and bake them for about 10-15 minutes until golden brown.

My second batch took less time, so that is why I am giving you the range. And each oven is different, so just keep an eye on them!

How To Fill Your Chocolate Eclairs:

You can fill your homemade eclairs a few different ways.

The easiest way would be to simply cut them in half and spoon the filling in and then place the top on. Basically an eclair sandwich. If you’re new to making eclairs, this might the option to go with.

Another way is to poke three holes in the bottom using a toothpick. Then begin filling your eclairs on the left side first and when you see the filling come out the center stop. And repeat on the right side the same way.

The best way might be a trick I picked up from Barbara over at Barbara Bakes. She suggests you poke a couple holes in the top of the eclairs. Let gravity do its thing. If you’re covering up the tops anyways with a ganache or some other fun toppings, then no worries about people seeing the holes.  No messy filling oozing out the sides and bottoms. Um can you say genius?

What do  you fill eclairs with?

Oh the possibilities. Of course stabilized whipped cream works great. You could also fill the eclairs with pastry cream. I have a step by step tutorial to make your own pastry cream you can check out here.

You could also try flavoring your whipped cream or pastry cream as well.

Once they are filled, I then want to top them with some homemade ganache.  I used a traditional ganache ratio of equal parts heavy cream and chocolate. Ganache is simple to make! Just heat 1/2 cup heavy cream in a saucepan or microwave for 30 seconds to 1 minute until hot, but not boiling.

Then pour the cream over 4 ounces chopped chocolate. Let it sit for 5 minutes then stir until smooth. That’s it! You of course can keep it simple and dust some powdered sugar over them as well.

Pro Tip: Homemade eclairs are best served soon after filling them otherwise they tend to get soggy. 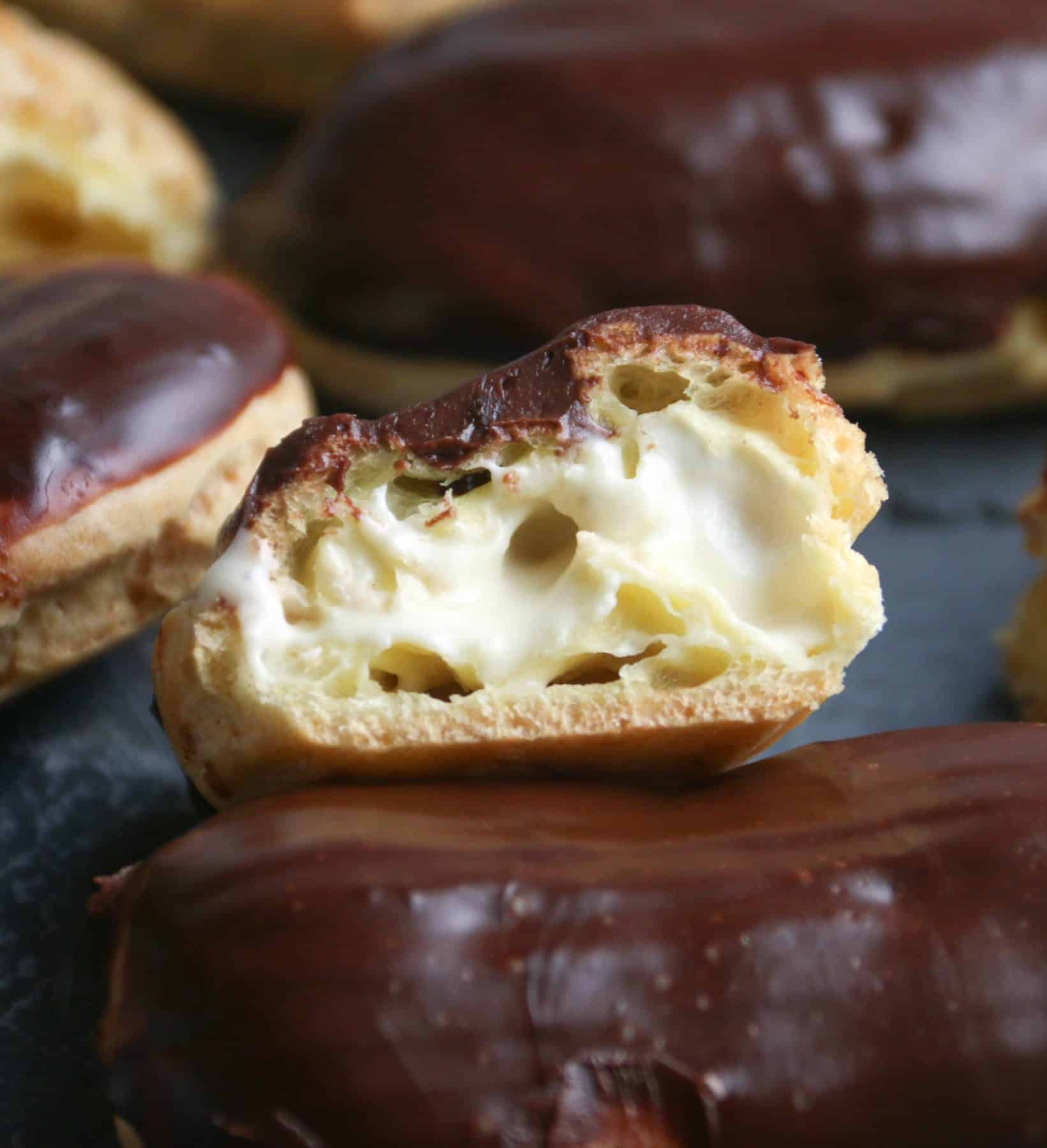 So I may not live in Paris or have a French bistro down the street. But at least I can make my own homemade chocolate eclairs now at home. I hope this tutorial has give you the confidence to try them yourself at home!

If you love this recipe and tutorial then be sure to leave me a comment and star rating below! And as always, happy baking! 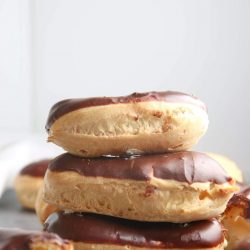 For the pate a choux dough:

For the pastry cream: 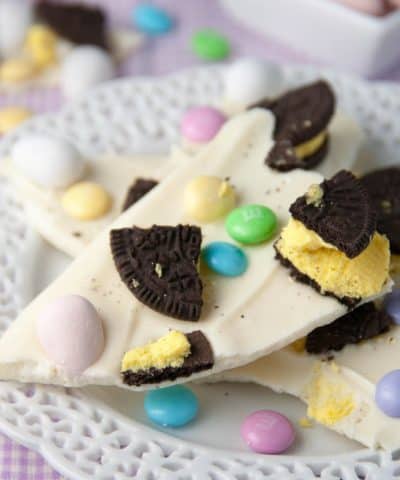 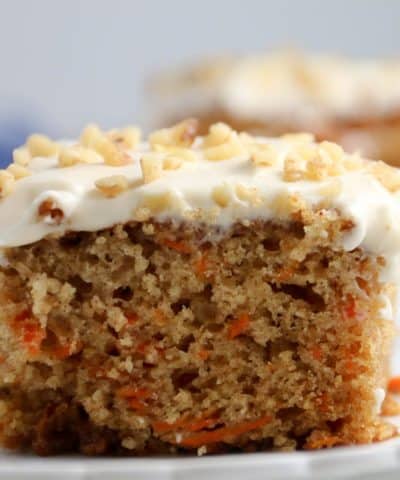 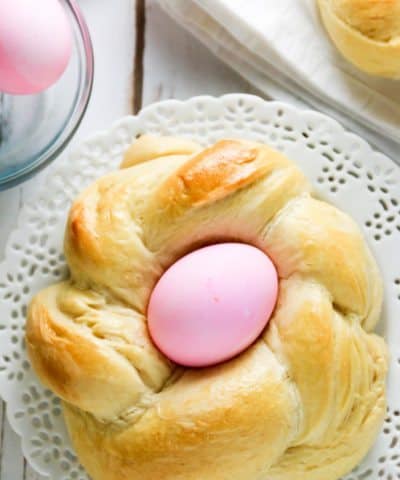 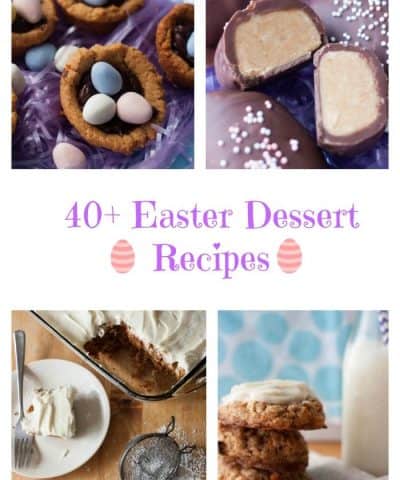 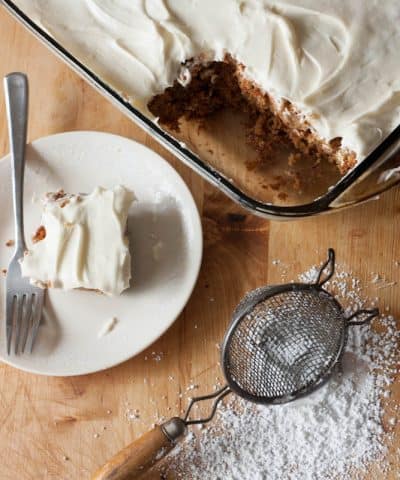 Easy Carrot Cake From Scratch (made in one bowl!) 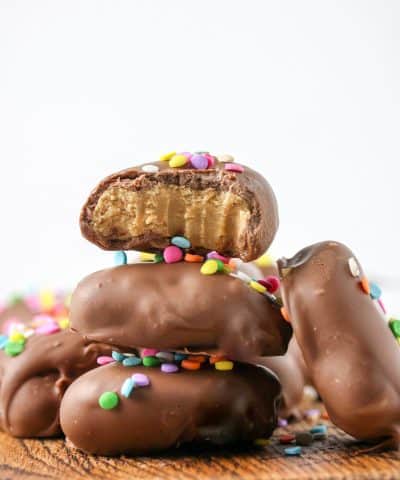